Leading an international movement
for peace and consciousness transformation 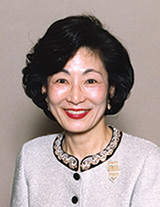 Masami Saionji is the chairperson of three peace organizations: Byakko Shinko Kai, the World Peace Prayer Society, and the Goi Peace Foundation. A native of Japan and a descendant of the Royal Ryukyu Family of Okinawa, Mrs. Saionji continues the work of her adoptive father, Masahisa Goi, who initiated a movement for world peace through the universal prayer May peace prevail on Earth.

As a spiritual leader and lecturer, she has touched thousands of people’s lives through her guidance and inspiration. She travels globally on speaking tours, and has led peace ceremonies in many countries as well as at the United Nations and other international organizations. She is also an honorary member of the Club of Budapest and a member of the World Wisdom Council.

Mrs. Saionji has authored over twenty books in Japanese and eight in English and other languages, including The Golden Key to Happiness, You Are the Universe, Vision for the 21st Century, Think Something Wonderful, Cries of Life, and Evolving with the Universe.

In 2008, Mrs. Saionji and her husband Hiroo were awarded the Philosopher Saint Shree Dnyaneshwara World Peace Prize in India. Mrs. Saionji is also the recipient of the 2010 WON Award honoring distinguished women leaders. In February 2013, she had the privilege of presenting the Symphony of Peace Prayers ceremony at the United Nations, in a special event entitled “United for a Culture of Peace through Interfaith Harmony,” hosted by the President of the UN General Assembly.

Mrs. Saionji and her husband have three daughters, and currently live in Tokyo.