The SOPP is not just an interfaith event. It is a magical act of creation. During an SOPP ceremony, I have the sense that we are creating a new way of seeing the world, a new way of thinking of ourselves in relation to others, and I know that this powerful vibration of oneness is actually changing the planet and myself.
– SOPP organizer in Uruguay

Every year, the Symphony of Peace Prayers becomes a source of light and joy for more and more peace-loving people around the world. We hope the words and images shared here will inspire you to join the growing number of people who gather each May to pray for peace!

Visit our photo galleries to view photos from SOPP ceremonies and prayer gatherings held around the world in recent years. 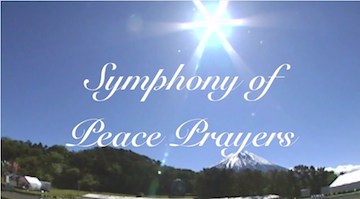 From the SOPP in Buenos Aires, an event that has expanded over the years and brought together hundreds of people of all faiths and traditions:
Video: SOPP ceremony, Buenos Aires, Argentina, May 2011

Comments, messages and prayers for peace
Read what past prayer leaders, guests, and participants have said about the Symphony of Peace Prayers and some of the unique prayers offered at past ceremonies and gatherings around the world.

Messages of support
Read some of the uplifting messages sent to us from spiritual leaders and other prominent individuals who have taken part in SOPP ceremonies.

Comments from organizers and participants
A collection of wonderful comments from people who have hosted or participated in SOPP ceremonies and gatherings.