On May 18, 2014, some 6,000 of people from Japan and abroad gathered in the beautiful setting of Fuji Sanctuary, at the foot of Mount Fuji. On this sacred ground, they came together to celebrate the tenth annual Symphony of Peace Prayers.

Their powerful prayers for the peace and happiness of humanity, for harmony among religions and nations, and for a transformation of consciousness on a global scale, once again resonated across the globe, merging with the prayers of thousands more who held gatherings in various parts of the world, as well as those joining the celebration through the live internet broadcast.

In her message to SOPP participants, Mrs. Masami Saionji, Chairperson of Byakko Shinko Kai and the visionary force behind the Symphony of Peace Prayers, made the following remarks about the SOPP and the significance of its 10th anniversary:

It is said that the tenth year marks a turning point, and the SOPP is no exception to this. Thanks to the precious prayers that you have earnestly continued praying these past ten years, in all kinds of conditions—prayers that have transcended all boundaries to create a beautiful, harmonious symphony—with this year’s ceremony, the magnificent foundation is at last complete. The prayers of different faiths and traditions are woven together like a brightly colored tapestry, constructing a foundation made from ancient wisdom and original artistry, and filled with a sense of oneness.

What will take place upon this foundation? In 2015, the Symphony of Peace Prayers will enter a new stage… An international group of leaders in various fields—politics, science, economics, the arts, education, and so on—will discuss how we can construct social systems that are rooted in humanity’s essential divine nature, and what kind of world we will create when each individual manifests his or her own primal, sacred consciousness.

To read the full message, please use the link below:
Download: Masami Saionji’s message for SOPP 2014 (PDF)

This year, Fuji Sanctuary once again welcomed a distinguished international group of prayer leaders from various faiths and traditions who led the participants in prayers for peace from their respective faiths. Special messages were also delivered by guests in attendance.

Prayer leaders and guest speakers in 2014

Rabbi David A. Kunin (Judaism)
Rabbi of the Jewish Community of Japan in Tokyo 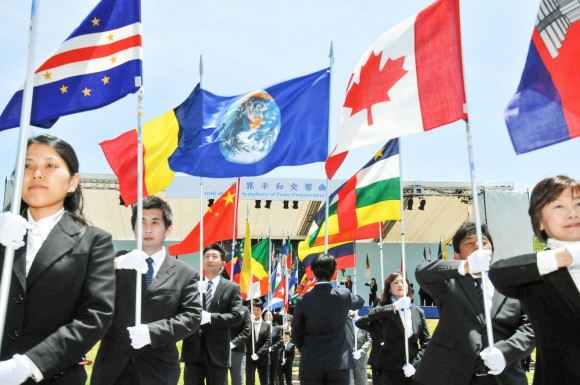 Flag bearers in the Prayer Field at Fuji Sanctuary, 2014

The second major part of the SOPP program was a large-scale ceremony to pray for peace in each country and region on Earth—a beautiful and deeply moving ceremony where each nation is honored and prayed for in its official language(s), accompanied by the graceful presentation of its national flag. The Earth flag closed the prayers, celebrating the oneness of our human family and of all life on earth.

While Fuji Sanctuary is the global home of the SOPP, it is only one part of a growing network of prayer for peace that extends all across the globe. This year again, we were very encouraged to see the SOPP supported by dozens of events held around the world, in connection with the Symphony of Peace Prayers as well as Global Peace Meditation and Prayer Day. (Pictured above: flyers for events in San Luis, Argentina, Potenza, Italy, and Amsterdam, Netherlands)

Thank you to everyone who joined in uniting your hearts in prayers for peace on May 18th!