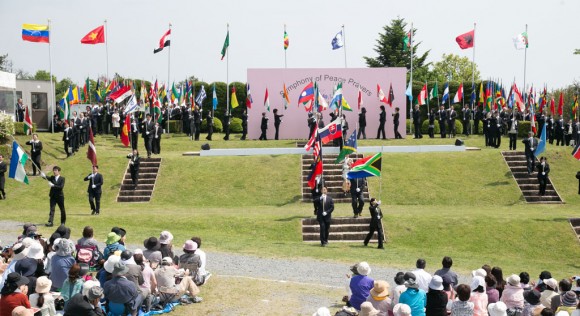 The 12th annual Symphony of Peace Prayers (SOPP) ceremony took place at Fuji Sanctuary on May 15, 2016. Once again, thousands of people from across Japan and around the world gathered in the open-air sanctuary for this beautiful celebration of humanity’s oneness within its diversity.

This year, the theme of the SOPP was shaped by the Fuji Declaration’s  Soul of WoMen Global Campaign. Celebrating the first anniversary of the Fuji Declaration, the campaign calls on women and men in communities around the world to activate the ‘divine feminine’ for a more balanced society. By bringing the feminine and masculine aspects of humanity into balance, we can free ourselves of prejudices and stereotypes, embracing all of humanity as one, so that we can fully ignite the divine spark within all of us. Click here to visit the Soul of WoMen campaign page.

In her welcome address, Byakko Chairperson Masami Saionji took the opportunity to thank those individuals around the world who have given exceptional support to the Symphony of Peace Prayers over the years. These included past prayer leaders and guests at Fuji Sanctuary, as well as those who have been organizing SOPP events overseas.

This year, Fuji Sanctuary again welcomed an international group of distinguished prayer leaders and guests from various faiths, spiritual traditions, and other fields of activity. Participants were invited to join in peace prayers from each of these faiths and traditions, celebrating the diversity of faiths and cultures and their common wish for peace and harmony. This year’s prayer leaders were:

Originally, every human being is a divine being—
Truth itself,
Infinite life itself,
Shining radiantly.

In the divine realm,
The world is originally at peace.
We are here to express this truth
In this present world.

Following the prayers of different faiths, a group of visionary women and men from various countries who had gathered two days earlier in Tokyo to discuss the themes of the Soul of WoMen campaign were introduced on stage by Mr. Hiroo Saionji, President of the Goi Peace Foundation. One by one, they greeted the participants and delivered their own personal messages. 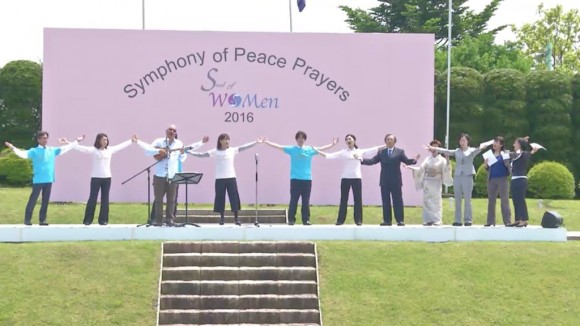 Next, musical guest Mr. James Twyman also addressed participants on the theme of the divine feminine, and then all participants and guests joined in a minute of silence. Mr. Twyman performed his original song, “May Peace Prevail on Earth,” followed by the song “We Are All Shining Divine Sparks,” which was introduced at the 2015 SOPP.

After the musical performance, the flags of the world were carried into the Prayer Field and presented on stage as participants prayed for peace in each country, in the country’s national language(s). This moving ceremony, which has been performed around the world for many years, sends loving vibrations to people in all nations and regions on earth.

To conclude the ceremony, Byakko Deputy Chairperson Yuka Saionji offered heartfelt closing remarks, and then the national flags were carried back into the Prayer Field for a rousing finale.

While Fuji Sanctuary is the global home of the SOPP, it is only one part of a growing network of prayer for peace that extends across the globe. In 2016 over 80 events (a record number!) were registered on the SOPP website, and we received many beautiful photos and wonderful stories from the SOPP ceremonies and prayer gatherings that were held all around the world. Please visit our Archives and Photo Galleries for more.

Our heartfelt gratitude goes out to all the organizers and participants who made this year’s Symphony of Peace Prayers and the Soul of WoMen campaign such a great success!

SOPP 2016 Program Guide (PDF) — Contains: Message from Chairperson Masami Saionji, Prayers for the Peace of Each Country in Each National Language, Introduction to Soul of WoMen Global Campaign, songs performed by James Twyman, and “Gratitude for All Life on Earth” prayer.