2017 Program Guide (PDF) — Contains: Program schedule, Message from the Chairperson, “We Are All Shining Divine Sparks” lyrics, Prayers for Peace in Each Country, and Gratitude for All Life on Earth.

The 13th annual Symphony of Peace Prayers was celebrated at Fuji Sanctuary on May 14, 2017, with some 10,000 people attending. Since the 1980s, this beautiful open-air sanctuary at the base of Mount Fuji has been home to countless prayers for the peace and happiness of humanity.

In 2015, the SOPP provided the venue for the launch of the Fuji Declaration, an historic global initiative calling on all human beings to awaken their innate sacred consciousness, or divine spark, for the creation of a harmonious, sustainable civilization on planet Earth. And last year, the SOPP celebrated the Fuji Declaration’s Soul of WoMen campaign to activate the divine feminine in ourselves and in society for a more balanced world.

The 2017 SOPP continued the work of the last two, emphasizing the need for unity, balance, and an elevation in consciousness to acknowledge and embrace the divine spark that resides in each and every human being. Now more than ever, the world needs peace-loving people to raise their voices and offer their prayers to break down the imagined barriers that keep us apart. As one human family, we can achieve a marvelous new world where every way of life is accepted and celebrated, where all people are treated with kindness and love, and where everyone is free to live the life they wish for.

In her message for SOPP 2017, Byakko Chairperson Masami Saionji wrote the following:

Today, our world is at a critical juncture, with volatile atmospheres building up in numerous countries. Many people no longer know what to believe, and vortexes of distrust are popping up in one place after another. In these circumstances, people who believe in humanity’s divine nature and pray for world peace are the light of hope in this world.

It is the consciousness of each individual that gives shape to the ever-changing trends and movements of this world. In this sense, the existence of people who join hands in a spirit of oneness and work tirelessly for world peace is greater than we might imagine. It is the mission of this year’s SOPP to see such people take the initiative in reviving humanity’s divine spark and restoring balance between the divine feminine and divine masculine.

In 2017, Fuji Sanctuary once again welcomed an international group of distinguished prayer leaders and guests from various faiths, spiritual traditions, and other fields of activity. Participants were invited to join in peace prayers from different faiths and traditions, celebrating the diversity of faiths and cultures and their common wish for peace and harmony. 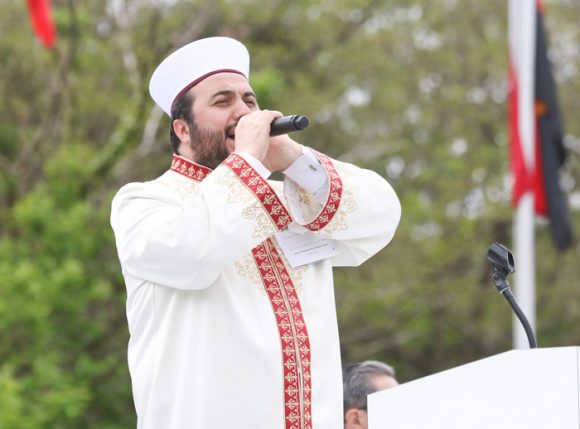 This year, a new international symposium on the Fuji Declaration was held prior to the SOPP, with the theme of “Restoring balance between the divine feminine and divine masculine.” At the SOPP, many of the participants from this event were welcomed on stage as special guests and invited to offer a brief message to participants.

This was followed by a performance of “We Are All Shining Divine Sparks”, the song written for the inauguration of the Fuji Declaration in 2015. Accomplished Japanese vocalists Ms. Tomoko Maekawa and Mr. Fumio Onuki performed the song together in both Japanese and English, and then all participants were invited to join in singing the second time.

After this, Mr. Peter Jiseok Jung, Director of the Border Peace School in Korea, gave a special address, talking about his work to establish greater peace between North and South Korea, and the power of prayer in creating peace.

Toward the end of the ceremony, participants were invited to pray for peace in each country, saying the word ‘peace’ in each country’s national language(s), as its flag was presented on stage. This moving ceremony, which has been performed around the world for many years, sends loving vibrations to people in all nations and regions on earth. 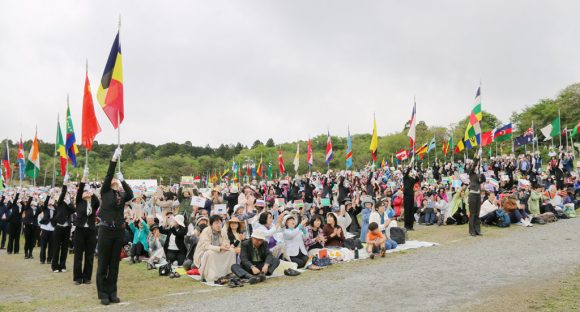 While Fuji Sanctuary is the global home of the SOPP, it is only one part of a growing network of prayer for peace that extends all across the globe. We have received many beautiful photos and wonderful stories from SOPP ceremonies and prayer gatherings that were held around the world in 2017, and we are pleased to share these in our Archives and Photo Galleries.