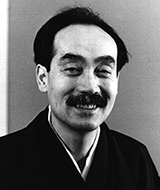 In 1955, Japanese poet and philosopher Masahisa Goi brought forth the universal message and prayer, May Peace Prevail on Earth.

In his early years, Masahisa Goi aimed at a career in music, but found himself spontaneously guided in the direction of philosophy and spiritual guidance. At the age of 33 he attained oneness with his divine self. This first part of his life is recounted in his autobiography, One Who Unites Heaven and Earth (Byakko Press, 2005)

Mr. Goi envisioned a movement of prayer for world peace that transcended all religious, social, ethnic and political barriers. He believed that if we cast all our personal thoughts, desires, and troubles into the prayer May Peace Prevail on Earth, the elevated vibration of this prayer would have a uniting and positive effect on all humanity, and would simultaneously bring us closer to our true, radiant self. In Japan, where he is respected as a great master in his field, Mr. Goi founded Byakko Shinko Kai, and provided many people with spiritual guidance for the attainment of inner and world peace.

Masahisa Goi is the author of more than sixty books and volumes of poetry. Among those published in English are God and Man, One Who Unites Heaven and Earth, The Spirit of Lao Tsu, and I Heard It Like This: The Wisdom of Masahisa Goi (compiled by Hideo Takahashi). Before departing from this world in 1980, he named Mrs. Masami Saionji, his adoptive daughter, as his successor and leader of the world peace prayer movement that he initiated.