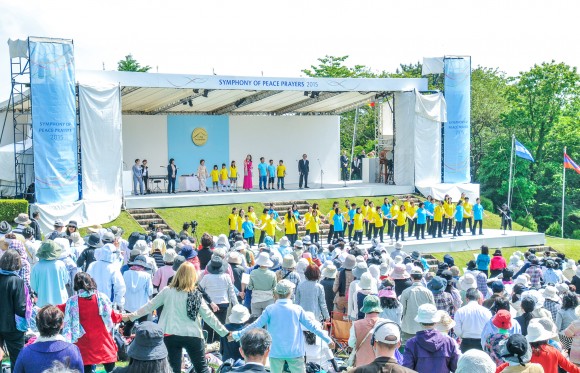 The 11th annual Symphony of Peace Prayers (SOPP) was celebrated at Fuji Sanctuary on May 17, 2015. This year’s celebration was the largest and most significant SOPP ceremony to date, with distinguished business leaders, scientists, educators, artists and others from around the world joining an international group of religious and spiritual leaders. They and the thousands of participants joined in the inauguration of the Fuji Declaration, an international charter that seeks to awaken the sacred consciousness—the divine spark—in all humanity in order to spur a transformation in our civilization and create a more peaceful, harmonious, and prosperous way of life on planet Earth. The SOPP, a global celebration of harmony and oneness where people from all different backgrounds join together to pray for peace and create a better world, has much in common with the purpose and spirit of the Fuji Declaration. For this reason, the SOPP at Fuji Sanctuary was seen as the perfect occasion to inaugurate this historic initiative. Read Masami Saionji’s open letter introducing the Fuji Declaration. 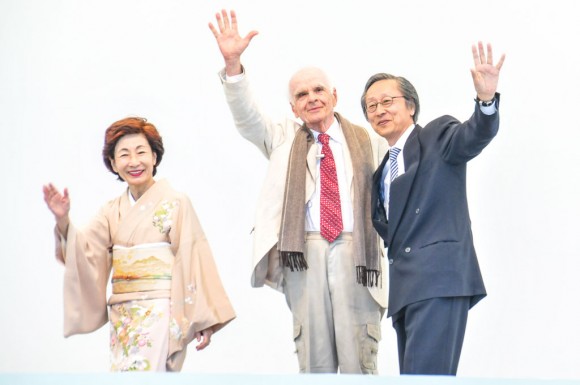 The three initiators of the Fuji Declaration—Masami Saionji (Chairperson of Byakko Shinko Kai), Hiroo Saionji (President of the Goi Peace Foundation), and Dr. Ervin Laszlo (Founder and President of the Club of Budapest)—were all present at the ceremony, and each of them offered a few words to introduce this historic initiative.

In her talk, Masami Saionji remarked: Our happiness and peace are not something we can get from others, nor can they be given by God. They must be created by the divine consciousness inherent in each of us. The goal of humankind is to rediscover this divine spark… Let us together build a new spiritual civilization—a civilization based on the divine spark.

Later in the ceremony, the Fuji Declaration was officially inaugurated, as Masami Saionji read the full text aloud, and participants recited together the individual declaration at the end of the document. A large, international group of founding signatories were introduced on stage. Two days earlier, this group had participated in a special discussion forum to mark the launch of the Fuji Declaration, sharing their experiences and ideas on how the declaration can be applied within their respective fields to advance humanity toward a new spiritual civilization.

Prayer leaders on stage at the 2015 SOPP at Fuji Sanctuary

This year’s SOPP once again featured a distinguished group of religious and spiritual leaders to lead participants in prayers for peace from their respective faiths and traditions:

Following these prayers, participants and guests joined together to offer prayers for peace in each country and region on earth, as the national flags and the Earth flag were carried proudly through the outdoor Prayer Field and presented on stage—a beautiful and moving ceremony that is well loved at Fuji Sanctuary and around the world. 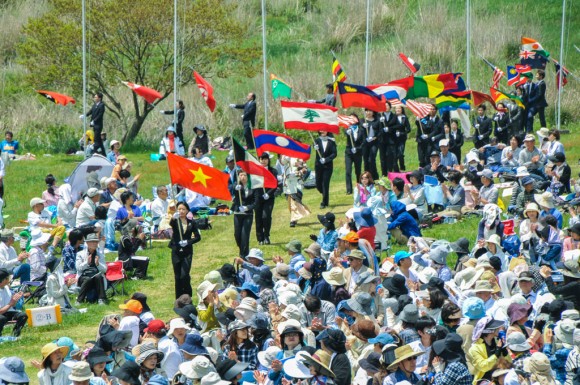 The 2015 SOPP featured music by a variety of artists and performers. Stanislav Ujhazi opened the ceremony with a short performance on the fujara, a traditional instrument from his native Slovakia. American musicians Kenji Williams (violin) and Kristin Hoffmann (vocals and keyboard) performed a musical prelude at the beginning of the ceremony. Mr. Williams also arranged and directed the Harmony of Sacred Sounds program later in the day, which featured Ms. Hoffmann, Mr. Humayun A. Mughal, Rev. Ohashi Jihou and friends from Tenreizan Tonenbo, and three members of the Gagaku Music Society of Tenri University. During this program, a large group of presenters performed choreography with Japanese folding fans, each bearing a light-filled word, and offered a wordless prayer to call forth the divine spark in all humanity. 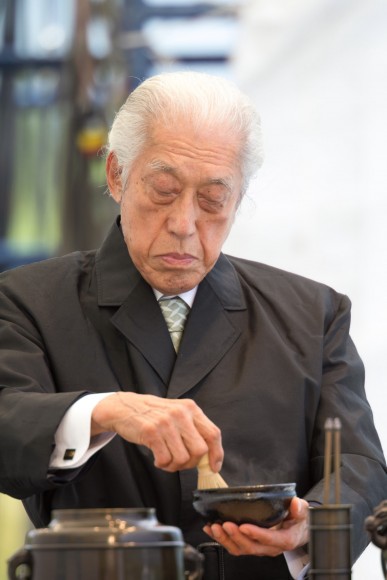 Also special to this year’s event was a Tea Ceremony Dedicated to World Peace, performed by Dr. Genshitsu Sen, 15th Urasenke Grand Master. Dr. Sen has for many years been a global advocate of culture and peace, promoting his ideal of achieving “Peacefulness through a Bowl of Tea.” With great care, he performed an exquisite ten-minute tea ceremony on stage.

The ceremony concluded with a moving Finale Song, entitled “We Are All Shining Divine Sparks.” With words by Masami Saionji and music by well-known Japanese composer Toshiyuki Watanabe, the song is a simple and beautiful summation of the message of the Fuji Declaration. It was performed on stage by Japanese soprano vocalist Tomoko Maekawa and the choir of nearby Hitoana Elementary School, as participants rose to their feet and joined in. 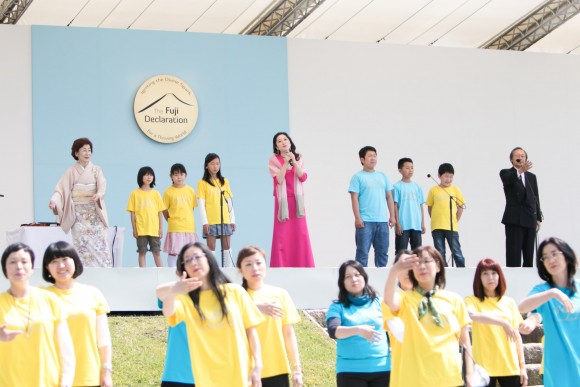 Finale Song at the 2015 Symphony of Peace Prayers

For the third consecutive year, the SOPP at Fuji Sanctuary was broadcast live over the internet, enabling people anywhere in the world to connect with the powerful, harmonious energy generated at the sanctuary. This year, the English live stream included live commentary by Ben Hart and Caroline Uchima. Click here to view the ceremony in its entirety.

While Fuji Sanctuary is the global home of the SOPP, it is only one part of a growing network of prayer for peace that extends all across the globe. We would also like to express our sincere gratitude to the organizers and participants in SOPP ceremonies and prayer gatherings held around the world this year!