On May 19, 2013, Fuji Sanctuary celebrated the ninth annual Symphony of Peace Prayers! More than 5,000 participants and many distinguished guests joined in sending out prayers for the peace and happiness of humanity, harmony among nations and religions, and a transformation in human consciousness.

Read about the highlights of the large-scale SOPP ceremony and other related events here:

This year, for the first time, the SOPP ceremony at Fuji Sanctuary was broadcast live online, enabling people all around the world to connect with the powerful, harmonious energy generated at the foot of Mount Fuji.

In her message for the 2013 SOPP, Mrs. Masami Saionji, Chairperson of Byakko Shinko Kai, remarked that the SOPP is expanding on a grand scale, from ceremonies and prayer gatherings held in various part of the world, to the recent SOPP ceremony that was held at the United Nations. The number of people who know when and where the SOPP began may be few indeed, she wrote, but regardless of whether others aware of it, we will continue praying and resonating waves of light. In our prayers, we will send the message that the whole world is one.

Mrs. Saionji is also looking ahead to 2015, when an even larger-scale SOPP event is being planned at Fuji Sanctuary: Today’s ceremony is a drop of exquisite light that will send expanding circles of brightness through the world. 2015 represents the time when this brightness will envelop the entire planet. We will continue sending out our peace-filled prayers in anticipation of this radiant moment to come. Read Mrs. Saionji’s full message for SOPP 2013 by clicking the link below:

This year, eight prayer leaders from various faiths and traditions led participants in prayers for peace from their respective faiths, and two distinguished guests addressed participants with messages of peace:

Prayer leaders and guest speakers in 2013

In addition, Byakko Shinko Kai was pleased to welcome the following youth participants to Fuji Sanctuary in 2013:

As always, the SOPP at Fuji Sanctuary included a large-scale ceremony to pray for peace in each country and region on Earth. Flag bearers carrying large national flags entered the Prayer Field to form a beautiful array of color, and then each flag was presented on stage as participants prayed for peace in that country, using the country’s own national language(s). 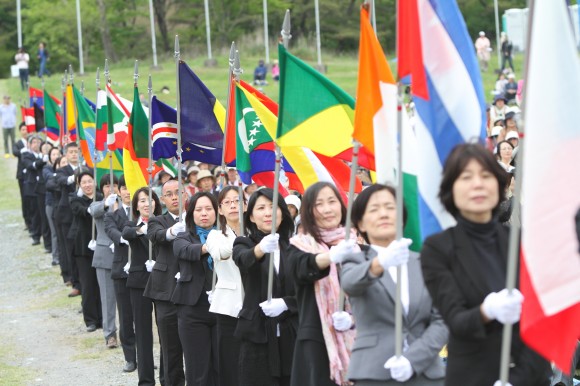 Flag bearers in the Prayer Field at Fuji Sanctuary, 2012 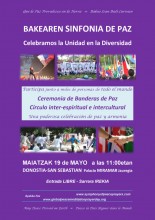 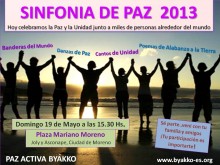 While Fuji Sanctuary is the global home of the SOPP, it is only one part of a growing network of prayer for peace that extends all across the globe. We were very encouraged to see more than 60 SOPP events around the world registered on this website (see the SOPP world map). (Pictured here: flyers for events in San Sebastian, Spain and Moreno City, Argentina.)

We have also received a number of heartfelt messages from past prayer leaders and guests outside Japan, including the following message from Mr. Mario Fungo in the Philippines, and the poem below, by Mother Mangalam in Malaysia.

In today’s world, the shifting of consciousness towards unified efforts among the faiths, to join in spiritual activities with mutual love and respect, is gaining tremendous energy, this toward the renewal of the earth and humanity. The Symphony of Peace Prayers among religions, spiritual paths, different cultures and traditions, is one of the best opportunity to express harmony, love, peace and unity; it has the power to change the world. Experiencing and feeling the energy of Love, Peace, and Harmony among individuals is the first step towards shifting human consciousness to world peace. To all groups and individuals around the world who are joining SOPP on May 19, 2013, may it be an event powerful enough that it contributes to shifting the course of humanity.
— Mr. Mario Fungo, Philippines

WHAT IS PEACE?
by Mother Mangalam (Malaysia)

What is peace if not in –
giving of one’s self.
sharing of one’s wealth
caring for others
smiling at one’s neighbour
loving without a bargain
understanding your opponent
using your tongue with care
gazing at the stars and the moon
protecting nature’s virginity
delving into one’s conscience
feeling for the weak
abiding by the rule of law
abstaining from greed and anger
expanding our love to all humanity
performing our dharma amid the humdrum of life
using our energy for constructive purposes
subduing the ego in us
living in Supreme consciousness
seeing the One Spirit in all.

Give peace a chance
If that is what you are searching for
For peace begets progress and prosperity
Both in matter and spirit
The basic elements of life’s existence.