A perspective from the Shift Network

A special role at the 2015 Symphony of Peace Prayers was filled by Mr. Ben Hart from the Shift Network. The Shift Network is an education and media organization in the United States that is working to empower a movement of people for an evolutionary shift in consciousness, in order to create a more enlightened, sustainable, and peaceful society. Ben was a youth participant at the 2012 SOPP, and returned in 2015 to give commentary during the live broadcast, along with Ms. Caroline Uchima from the World Peace Prayer Society’s Scotland sanctuary. 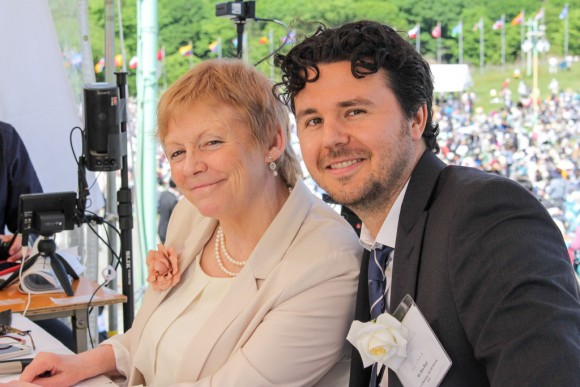 Here is an excerpt from Ben’s article on the Shift Network blog:

In the future, we see the possibility for the norm being media that serves the interest of the global community through truthfully informing us while spreading inspiration and innovation that supports a harmonious and sustainable world.  In this, media aspires to educate the public with a heart-based consciousness as it’s foundation, serving as a reflection of our highest ideals and intentions for life on this planet.

There were many ideas about how to move media forward toward this greater vision, the majority of which were focused on projects members of the group might undertake themselves.  For my part, I’m excited for us to create more media here at The Shift Network that not only shares more of our transformational offerings but also highlights what’s working in the greater initiatives of shifting our world. There is so much amazing work being done on the ground as people take inspired action that can educate and catalyze us.  More to come on this in the future!

The other main event of this gathering was a celebration called The Symphony of Peace Prayers (SOPP), taking place in a beautiful area at the base of Mt Fuji and attended by over five thousand people. During the event, representatives from 9 different religions shared their prayers, which was a lovely experience. It was as if the prayer from each religion (Shintoism, Judaism, Islam Sufism, Protestantism, Sikhism, Islam, Roman Catholicism, Hinduism and Buddhism) was a sacred instrument and in its sharing, we could experience them all merging into a greater symphony, expressing humanity’s deepest longings and grandest ideals.

Following this, the flag of every country was presented and the entire gathering prayed for peace for each country, in the native language of that country.  I attended this event three years ago and was again so moved by this display of care and intention. To see thousands of people expressing their desire for peace in every region of the world in every language connected me strongly to our truth as one human family.

Thank you, Ben, for your wonderful article, your kind and thoughtful words, and your great contribution to the SOPP and the Fuji Declaration! We look forward to a continued partnership with the Shift Network long into the future!