An International Interfaith Peace Conference titled “Respect of Humanity and its Importance” was held in Islamabad, Pakistan, on November 24th. The chief guest of honor was Pakistani President Arif Alvi, and several ambassadors, federal and provincial ministers, and some 300 other religious leaders and peace activists also attended the event, representing the Muslim, Christian, Hindu, and Sikh communities. The event was organized and hosted by Maulana Abdul Khabir Azad, Grand Imam of Badshahi Mosque, a longtime supporter of the Symphony of Peace Prayers. 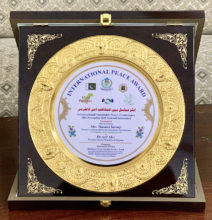 Masami Saionji could not be present in person to accept the prestigious award from President Alvi. Fr James Channan OP received her award in her stead, with the greatest of dignity and honor.

Fr Channan, Director of the Peace Center in Lahore, Pakistan, also received an International Peace Award from Shah Mahmood Qureshi, Foreign Minister of Pakistan. Fr Channan is another strong supporter of the SOPP. He and Mr. Azad first attended the SOPP at Fuji Sanctuary as keynote speakers in 2007. They returned as prayer leaders in 2010 and 2015 (offering Christian and Muslim prayers, respectively). Fr Channan was also a guest speaker at the 2019 SOPP. In addition, he and Mr. Azad have co-hosted several SOPP ceremonies at Peace Center Lahore. (Please see the Archives and Photo Galleries for more on many of these events.)

At the conference, President Alvi spoke about the spirit of unity in diversity stressing that all religions of the world emphasized promoting peace and tolerance for the betterment of humankind. He also highlighted the challenges and difficulties of promoting dialogue among religions and threats of extremism and discrimination in the name of religion which can be solved through interfaith harmony and dialogue. The event was covered extensively by local media.

May Peace Prevail on Earth.