SOPP 2015 at Fuji a landmark success! 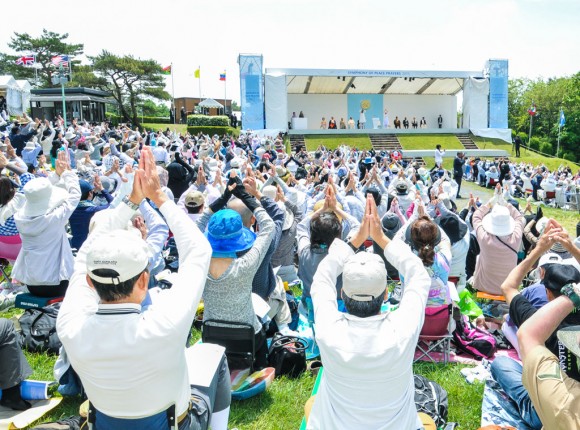 On May 17, under warm, sunny skies, thousands of peace-loving people from Japan and around the world filled the Prayer Field at Fuji Sanctuary for the eleventh annual Symphony of Peace Prayers.

The celebration began in the wee hours of the morning, with a smaller pre-dawn ceremony to connect live with the Gala Evening being held by Transition World at Kronborg Castle in Denmark. As the sun set in Denmark, it rose over Mount Fuji, where over 1,000 people stood in the Prayer Field to greet their friends half a world away.

By 10 am, the sun was high overhead, and many thousands more had arrived at Fuji Sanctuary for this year’s landmark SOPP ceremony. Among the participants were over 100 distinguished guests, many of whom had taken part in an international symposium held two days earlier as part of the launch of the Fuji Declaration.

Finale Song at the 2015 Symphony of Peace Prayers

For more details about the ceremony, please see the SOPP 2015 page, and download the SOPP 2015 Highlights in PDF format. If you would like to watch the recorded broadcast, please visit our Ustream channel.

We would to give an enormous thank you to everyone involved—participants, guests, volunteers, staff, and those around the world who tuned in to our internet broadcast. We would also like to thank the many people in various parts of the world who celebrated the SOPP along with us, holding their interfaith ceremonies, prayer gatherings, or simply praying for peace at home. We will posting more information about these overseas events very soon.