Connected in peace with thousands around the world! 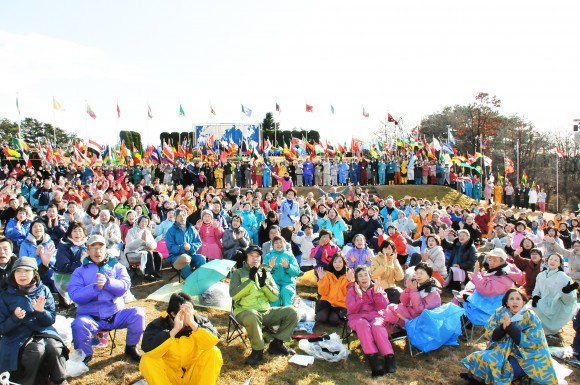 On December 22, 2012, over a thousand people gathered at Fuji Sanctuary to celebrate Birth 2012 with a peace prayer ceremony honoring each nation and region on earth. The ceremony was broadcast live worldwide over the internet, part of a three-day long celebration to mark the beginning of a new era in human consciousness and evolution.

Birth 2012 was conceived by visionary Barbara Marx Hubbard and organized by the Shift Network, a U.S. based organization that creates and runs courses, events, programs, and activities to empower a shift in consciousness toward “a more enlightened society built on principles of sustainability, peace, health, and prosperity.”

The ceremony at Fuji Sanctuary kicked off the fifth ‘Wave of Unity’ in the three-day live broadcast. At five minutes before 1 pm in Japan (8 pm on December 21, Pacific Standard Time), there was a brief introduction of Byakko Shinko Kai and Fuji Sanctuary, followed by a live greeting from Masami Saionji.

The prayers at Fuji Sanctuary resonated a peaceful wave of love and unity across the globe, and the online broadcast gave people around the world the chance to experience the power of this invocation for peace, and to join with the participants in Japan in offering their own prayers and wishes.

At the end of the ceremony, the participants at Fuji Sanctuary were asked to face the video camera so they could be seen by those watching around the world. Byakko Deputy Chairperson Yuka Saionji offered a few closing words, and then Masami Saionji once again thanked everyone for their heartfelt prayers, as participants waved goodbye into the camera. Altogether, the broadcast from Fuji Sanctuary lasted about 30 minutes.

“As we celebrate the birth of a new era, let us all begin a way of life that is responsible toward our planet and all life. Let us unite our hearts in prayer to bring about a shift in consciousness of humanity.” – Masami Saionji