SOPP celebrated at the United Nations! 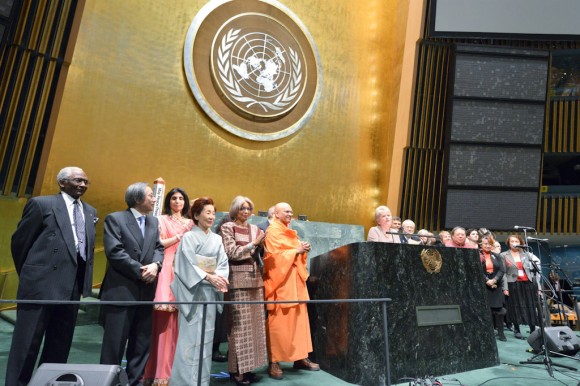 The event, part of the celebrations for World Interfaith Harmony Week, was hosted by H.E. Mr. Vuk Jeremić, President of the UN General Assembly, along with UNESCO and the Committee of Religious NGOs at the United Nations, and was sponsored or supported by a number of permanent UN missions from various countries. Mr. Jeremić and UN Deputy Secretary-General H.E. Ambassador Jan Eliasson offered opening remarks, after which eight well-respected figures in international diplomacy and interfaith collaboration offered their own messages of peace and harmony.

In the second part of the event, Masami Saionji, Chairperson of Byakko Shinko Kai, the World Peace Prayer Society, and the Goi Peace Foundation, introduced the Symphony of Peace Prayers, explaining its history and significance. She emphasized the role of prayer and the wonderful opportunity that the SOPP offers us to gather in peace while celebrating the diversity of faiths and traditions.

“Prayer is love. It is light, power, and the energy for regeneration. Prayer helps awaken the path of divinity within each human being. That is why I had the vision to start the Symphony of Peace Prayers, so that each and every human being can unite in prayer to create a grand symphony together.” 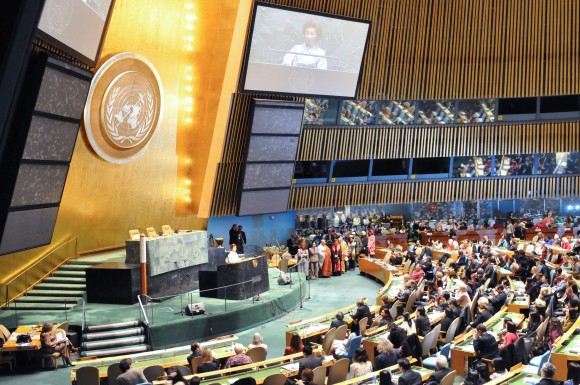 She also reminded us that our dualistic way of thinking, which creates separation and conflicts, must be transcended for true peace to prevail: “For as long as humanity’s thought remains trapped in struggle, discrimination, and religious confrontation, true peace will never come to this world. If we are to create true peace and harmony on earth, we must move beyond dualistic thinking and elevate our consciousness.
The prayers of many faiths that will be offered here at the united Nations shall help us transcend the walls of separation, and bring new inspiration to the global community. I firmly believe that this will be an historic event to open the door to a bright and peaceful future.”

Read: Masami Saionji’s speech at United for a Culture of Peace through Interfaith Harmony, Feb. 14, 2013

Following her speech, eleven religious representatives offered prayers for peace from their respective traditions. The third and final portion of the program was a world peace flag ceremony, introduced by Hiroo Saionji, President of the World Peace Prayer Society and the Goi Peace Foundation. Participants prayed for peace in each of the UN Member States and its two Observer Missions (Palestine and the Holy See), as the country’s flag was presented on stage.

The event was well attended and well-received, and represents a great leap forward for the grassroots Symphony of Peace Prayers movement that began at Fuji Sanctuary in 2005. A more detailed report on the event will be available soon.

A video of the full event can also be viewed online at the UN’s website:
Video: United for a Culture of Peace Through Interfaith Harmony, United Nations, Feb. 14, 2013

Our gratitude goes out to all the people who, through their hard work and prayerful thoughts, have continued to support the Symphony of Peace Prayers and have made possible this grand accomplishment!

May peace be at the United Nations! May Peace Prevail on Earth!