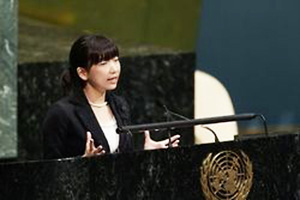 On February 7, 2012, the United Nations hosted an event called ‘Common Ground for the Common Good,’ as part of the annual World Interfaith Harmony Week celebrations. Speakers from various faiths, NGOs, and associations took turns sharing their experiences, emphasizing the ways in which religion and spirituality play a vital role in human life all over the world.

Yuka Saionji, Deputy Chairperson of Byakko Shinko Kai and one of the youngest speakers at the event, spoke about her experiences with volunteers, residents, and the religious community in the wake of the the Tohoku disaster of March 11, 2011. She spoke from her heart about the power of prayer and the importance of spirituality in such difficult circumstances.

A video of the event is available on the UN’s website at the link below. Yuka Saionji’s speech begins at approximately 1 hour, 55 minutes.

The event and particularly Yuka Saionji’s speech was reviewed in Katherine Marshall’s article in the Huffington post:

Harmony Among Religions at the United Nations by Katherine Marshall, Huffington Post, Feb. 11, 2012